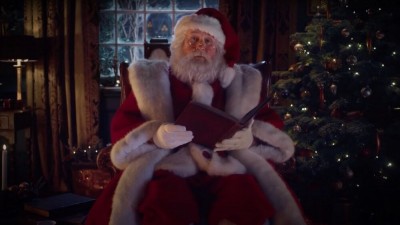 NOVEMBER 19, 2020 - If you live in the U.K. or Ireland, there’s a good chance you have heard of Kevin the Carrot.
For the rest of the world, here’s a little primer: Kevin the Carrot is a popular holiday mascot used in Christmas advertising for Aldi grocery stores.
A report from the Irish Mirror shed some light on Kevin’s 2020 return in the Irish version of a new Christmas ad featuring Star Trek actor Colm Meaney as the one (and only) Santa Claus.

Meaney narrates the story as Kevin the Carrot parachutes from his damaged airplane into a harsh winter landscape.

With some help from Harry the Hedgehog, the two travel through the snow on Kevin’s quest to make it home in time to spend Christmas with his family. When all hope seems lost, who should step in to save the day? Santa Claus, of course. Meaney, clad in full Santa Claus regalia, rescues the pair of travelers. With a touch of magic and a bicycle ride reminiscent of the classic Steven Spielberg film E.T., Kevin the Carrot makes it home just in time.

On joining the ad campaign, the Irish Mirror reported Meaney as saying, “I thought it was about time that I played the big man himself and so was delighted to be asked by Aldi to be part of its Christmas campaign.” Calling the experience a “total joy”, Meaney said, “Kevin the Carrot and his family were incredibly welcoming on set.”

On a personal note, Meaney added, “This year has been incredibly challenging for everyone but I hope that over the festive season people will be able to enjoy this special time with family and friends – and maybe the odd mince pie or turkey sandwich.”